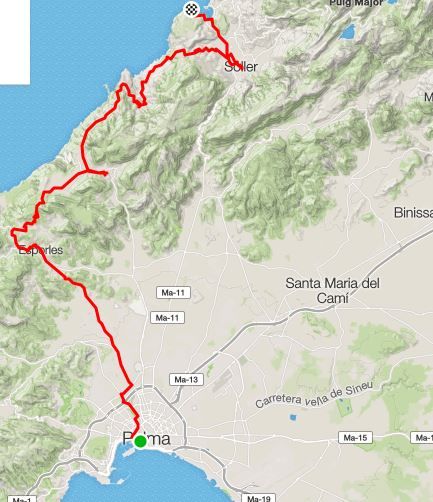 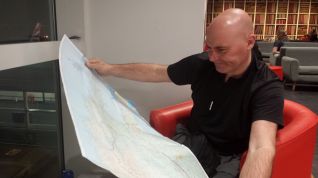 Too late to look at a map now
PALMA TO PORT DE SOLLER​ VIA ESPORLES
​After a few months of planning and research the day had eventually arrived when we were setting off.
Easyjet flights had been booked (at £90/pp return with no hold luggage), Nigel pre checked us in so although the Flight was 6am and we arrived 2 hours prior we needn’t have as we could’ve easily rocked up at 5am and still had time to kill. Anyway, we went through Passport control and with only a fully loaded pannier each. Once through we headed for the caffeine pit stop where John still had time to be looking at the paper (old skool) map of the island.

Once on board the plan was to have a bacon butty/coffee deal to set us up for the day – that was soon scuppered when they announced there were no sandwiches on board – oooops. Luckily John had brought some coronation chicken baps with him (originally for later in the day) so we made do with those. Once flying over the mountains of Mallorca ( Serra de Tramuntana) John was pointing out the landmark peaks and I must say they looked daunting to think we would be cycling over some of them.
Once landed we were soon off the plane and waiting in the queue for the number one bus which we knew took us into Palma. We alighted just as the bus turned away from the sea front and walked past the Cathedral and soon located Nano cycles (where we had pre-booked our touring bikes), the mechanic put my Brooks saddle and SPD pedals on my bike and John’s flats and straps on his. and we were off at 11-45am) . 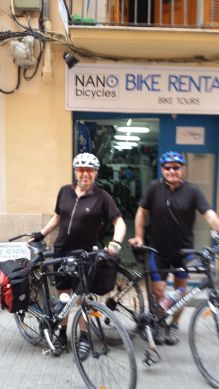 Nano Cycles
A few photo shots next to the cathedral before we made our way onto the excellent dedicated cycle path which leads you out of the busy city.
Our first village to ride through would be Esporles via MA-1120 and this was part of the 14 mile climb (strava cat 3) from Palma which would see us rise from Sea level to 1600 ft. Nothing too tasking as it was such a gradual climb. This is where we joined the MA-10 which is the main route heading up to Pollenca.
We had the choice of a short detour in to Valldemossa which was well worth it. We took the opportunity of a walk around this very picturesque village, taking more photos and another sandwich before heading off towards Deia.
Once in Deia we headed to the refuge where we managed a ‘Gelat Soller’ (local ice cream) and coffee (which were very reasonably priced). John asked if the guy looking after the refuge could phone the Muleta refuge where we would be staying that night and book us in for evening meal but we were told it was too late. Looks like we would be eating in one of the expensive harbour restaurants of Port De Soller.
Not long later we arrived in Soller where we had a ride around, finding the trams and cathedral of Sant Bartomeu which is beautiful inside and well worth a look.
Back on our bikes we descended down to the harbour of Port De Soller where we turned left to follow the road around towards the lighthouse (which was up a fairly steep hill (strava cat 4)). Our refuge would be above that and on the cliff top overlooking the sea.
Mulletta refuge caters for 30 guests in one dormitory in bunks. Most guests were walking the GR-221 and we were the only cyclists.

Mulletta Refuge
Connected to the free Wi-Fi (or wiffee as they pronounce it), drank a couple of lagers as our reward, quick shower and a relief to find they could cater for us as 3 guests hadn’t arrived. There was no menu just everyone helping themselves to a massive fish dish with vegetables etc, a bottle of red wine and a bottle of water supplied along with the traditional Mallorcan bread and olives and fruit for dessert.
Soon we would all be rushing outside for the fantastic sunset opportunities of such privileged location. We met some really interesting people including a couple of Dutch girls who were independently walking and one had significant walking experience in the UK. John enjoyed showing photos of where their paths had crossed. Everyone had to be in bed at 10-30 for lights out at 11-00pm (despite the Dutch girls trying hard to extend the deadline) – night all!
A great first day cycling but we knew day two was going to be much more difficult!!