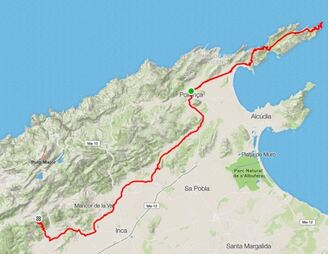 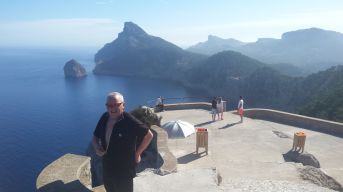 Mirador Es Colomer
POLLENTO CASTILL DE ALARO
The ablutions this morning were not going to be as entertaining as last night so we quickly packed and said our thanks and goodbye to Refugi Pont Roma for another year.
We breakfasted in The Bar Pont Roma where we dined last night and took the opportunity to leave our laden panniers at the cafe, allowing us a quicker return trip to the Cap de Formentor lighthouse.
We cycled over the Pont Roma (Roman bridge) which despite its name  is thought to be of medieval origin, and headed down towards Port de Pollenca. Our first climb ( strava cat 3) took us up to the Mirador Es Colomer, a fantastic cliff top view point . We stopped for photos and chatted to some roadies who were staying in Port de Pollenca. They were actually touring cyclists with stories of many trips round Europe and were very interested in our itinerary , its nice to inspire people. 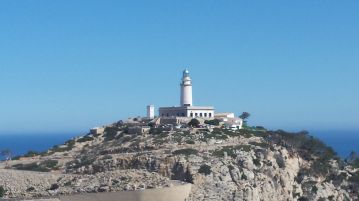 Cap de Formentor
A long descent to Playa de Formentor took us back down to sea level then another more gradual  climb past the very pretty bay of Cala Figuera , through a tunnel then on to the Lighthouse ( strava cat 3).
Its amazing to think that when the lighthouse was opened in 1863 the only access was by sea or a mule track until the construction of the road by the Italian engineer Antonio Parietti who was also responsible of the amazing road down to Sa Calobra . The return was via the same road with only the climb back up to Mirador Es Colomer earning a strava cat 3 . On the descent from the Mirador Es Colomer I managed to catch Nigel and pass a number of roadies who didn’t like the hairpins, needless to say I got some funny looks flying past them on my hybrid complete with rack. 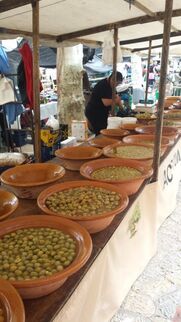 Local produce
We made good progress back the Bar Pont Roma, collected our bags and headed into the main square in Pollenca for a spot of lunch. It was Market day and the goods on display looked delicious. There was the usual tourist tat but also fresh produce in such quantities that I assume the locals must shop here too. We cycled out of Pollenca towards the Puig de Santa Maria briefly join the MA 2200 before turning right onto a minor road which traversed the south side of the Sierra de Tramuntana undulating its way to Alaro (I think it was called the pipeline or pipe run).
We made good progress ticking off the miles until Nigel was drawn to the temptation of coffee and cake at the Coves de Campanet, our extended lunch break and this coffee stop would haunt us later. With only 16 miles to go we lolled about enjoying the sunshine and smelling the flowers and chatted to more roadies not quite appreciating the work still ahead of us. We pushed on through Selva stopping again at Biniamar for an essential water stop……..we regretfully lingered further to soak in the atmosphere with the locals in the square, a 6pm finish was mentioned at this point and Nigel lay on a bench. 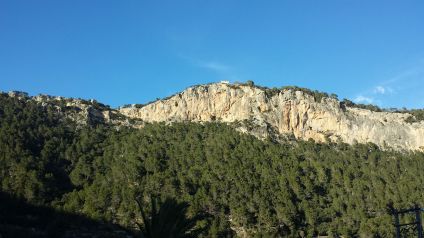 That's our accommodation up there
The road from Lloseta slipped in a sneaky cat 4 climb and rewarded us with a downhill reprieve to Alaro .
We sighted the Puig de Alaro, the mountain on top of which was located our beds for the night within the Castel de Alaro refuge….it seemed an unfeasably long way away both in distance and height. From Alaro at  200m altitude , the next climb would take us up to 720m over 3.2 miles , a cat 2 climb with an average gradient of 8% past the Es Verger restaurant on a very rough track/road to the clearing at Pla des Pouet.

​
At this point we had to abandon the bikes and crawl…..only joking…….we locked the bikes up at the clearing and had to walk the remaining 30 mins up to the Refuge. We arrived at 8pm paying the price for rather relaxed attitudes earlier and the echoes of Nigel saying ” Coffee? Why not, we are on holiday”!  We were warmly welcomed by the staff and shown to our room. The refuge is an amazing place , its location offering extensive views over to the west of the island towards Palma. The warden drives up to the Pla des Pouet clearing with supplies then uses mules to transport them up to the refuge. There is no mains water to the refuge so rain water is harvested and stored in tanks but the owner mentioned that there was plans to run a mains pipe up to the refuge in the future. We freshened up and joined our hosts and the only other residents ( a Czech family of 3 including their 4.5yr old daughter and they were walking) for our well earned evening meal catching the fading sunset as it passed behind Puig de Can Llenderina.